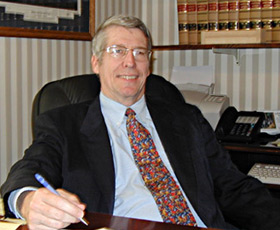 Fred Johnson began his career as a Supply Corps Officer in the US Navy, after graduating from Purdue University in 1971. In 1978, he left the Navy and joined Pratt & Whitney, United Technologies Corporation (UTC) in West Palm Beach, Florida. Mr. Johnson was given positions of greater responsibilities within the Military Product Support Department, culminating with managing over 120 people. In 1987, Mr. Johnson was one of seven individuals selected to participate in a two year, senior management development program which allowed him to select assignments within the Corporation. It was during this period that Mr. Johnson relocated to Connecticut, to begin his career in international business. He has developed a wide range of skills and contacts focusing on strategic business development.

Since starting his own company in 1997 Mr. Johnson was retained, by ITOCHU Corporation, to collaborate on a wide range of international business transactions, from 1997 to 2002. This relationship focused on implementing opportunities that support ITOCHU’s global client base by satisfying their offset and countertrade obligations.Mr. Johnson currently resides in the Indianapolis, Indiana area. He has two adult sons. He enjoys sailing, camping and recreational shooting.